What is RadiWise and how does it work? 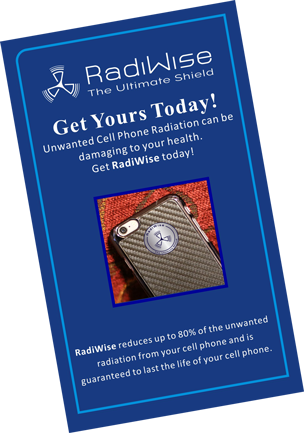 Simply install the RadiWise shield on your phone. RadiWise is  made of a unique material that has been designed to help reduce the damaging radiation that cell phones emit when in operation.

Over time with the use of a cell phone, the unwanted radiation can damage the health of the user. We are now finding that children are even more at risk since a child’s brain absorbs as much as 2x the radiation of adults. Smart cell phones are becoming an essential part of daily living, with many users spending more than two hours daily on their cell phones. 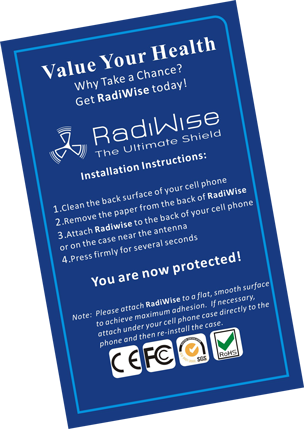 When installed on your cell phone near the antenna, the near field radiation plume can be reduced significantly. To take advantage of RadiWise technology, simply attach this revolutionary device to the back of your cell phone, per the installation instructions, and you will instantly receive the benefits. RadiWise is guaranteed to last the life of your cell phone or tablet.

“This is the first experimental evidence that fetal exposure to radiofrequency radiation from cellular telephones does, in fact, affect adult behavior…” said Hugh Taylor, Professor, and Chairman, Department of Obstetrics, Gynecology and Reproductive Sciences, Yale University.

NOTE: The latest tests show over 90% in shielding effectiveness (SE).

SAR (Specific Absorption Rate): Testing is now complete with excellent results!
There is a significant reduction in unintended radiation with RadiWise The Ultimate Shield.

Why take a chance? Get RadiWise for your cell phone or tablet today!
Scroll to top